I hope you’re doing fine in these strange times…

The last weeks I, just like you, have been wondering how the corona crisis will effect the digital nomad lifestyle.

At least for now, the life of flying everywhere and doing what you want is severely disrupted.

Today I summarize the hurdles in the near term future, and some opportunities for those ready to pivot. 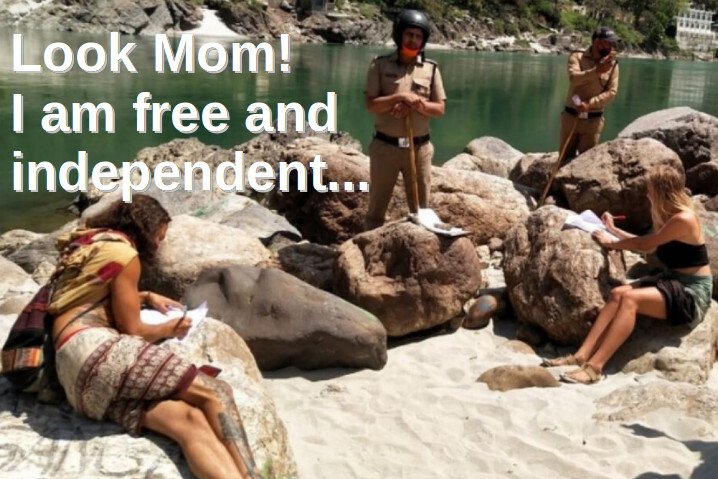 I am writing to you from the foothills of the Himalayas. The mountains are majestic. I am in Pokhara, Nepal.

I flew into Kathmandu end of January, heavily underestimating the cold winter here. With no warm clothes and no proper heating, I stayed mostly indoors for about a month.

At the end of the month, I drove down to Chitwan National Pak, where I saw wild rhinos, sloth bears, elephants, gharial crocodiles. etc.

Did you know that when you sit on an elephant the other animals don’t see you as a threat and you can come very close?

Then I did a mediation retreat in Lumbini, the birthplace of lord Buddha. It was tough, and a bit of a cult. But worth it, and did things in meditation I never knew possible.

After, I went to Pokhara, the tourist hotspot from where people track the mountains.

By now, the Corona virus had been spreading and people started to worry. Nepal only had three cases, but this did not prevent the government from suspending visa on arrival and cancelling all international flights. All the hiking trails, what I am here for, were closed as well.

And two days later, I went for lunch and saw no-one on the street. Shops were closed. A complete lock-down. Frankly, I did not see that coming. Especially, since only a handful of people are sick and not one person died.

But it is as it is. And now it is time to look at what is going on…

This brings us to our first point: governments around the world have massively intervened in our lives. There is no way to downplay this. And it really remains to be seen how this plays out.

Look, if governments (India) are willing to starve their own citizens in order to safe them from the virus (?), anything can be expected.

Be prepared for disruptions in your travels for the foreseeable future. And who knows what kind invasive procedures and requirements, such as e-passports and mandatory health-checks.

I am for example completely stuck. There is no way for me to go anywhere at this point. No plains and no buses.

When planning your travels, best plan to visit places where they are likely to let you in. Secondly, where you would be able to stay comfortably if a government changes its policy. Make sure you go to places you can stay for a while without relying on visa runs or running out of cash.

For the official guidelines check this website, which collects the latest arrival information from all countries in the world:

Best to visit countries with laid back cultures, rational governments, and dependence on tourism.

When it became clear that there was going to be a lock-down, there was a massive exodus here. Travelers scrambled or flights and buses. They went to Kathmandu, a depression place in normal conditions, and ended up being stuck in government centers.

If possible, avoid such dashes. They are almost always expensive, stressful, and it is when you make mistakes. You might be taken advantage of, especially in countries where you are viewed, as a Nepali friend called it, a piece of naive white meat.

My landlord kept urging me about organized transportation, and “final” buses to Kathmandu. Recommendations issued by the tourist board to register at the embassy. etc.

Now that the government has said that its probably best for everyone to stay where they are, he has peace with my stance.

One of the benefits of this lifestyle is that you don’t have to follow the masses.

There is no sector harder hit than the airline industry.

When flights were halted after 9-11 for three days in the US, the industry suffered billions of dollars in losses.

It’s hard to imagine what will happen if this lasts much longer. There will be bankruptcies all around.

Also, I have seen airlines sell tickets of flights that were already banned. Just to get some cash.

Be mindful and don’t book to far ahead.

As I also allured to in my book, but now more than ever its important to walk the line.

If this crisis show us one thing it is that most people aren’t able to think for themselves. The general populace thinks how the government tells them to think, even if it doesn’t make sense.

If you want to be able to do whatever you want to do, go to the country-side somewhere they don’t care about the corona virus. There are places where it’s business as usual.

Don’t go against the current. Stay under the radar.

Avoid people with authority who think they need to fix things. Ignore official policies as much as possible but comply when you have to. Don’t volunteer any information and don’t criticize anyone.

Just mind your own business.

For a lot of people these are very hard times. Resorting to tribalism is common. Some believe they are at war.

My landlord tells me this is worse than the second world war. I understand this virus worries people but it is a long shot from millions of people killing each other, thousands of cities flattened, a holocaust and two atomic bombs.

People aren’t thinking logically. And they will not respond to reason. Just accept this.

In a lot of countries “foreigners” who are considered the problem. They might also see your behavior as a threat. They might secretly be terrified of you, but only tolerate you because they need your money.

Maybe now is not the time to drunk-drive your motorbike into a rice field while dragging your latest tinder-date into a guest house.

Economies around the world are tanking. This will effect everybody. Some more than others.

The implementations will be far wider than currently understood. Don’t be surprised if countries completely collapse. Maybe even countries in Europe.

Most big corporation have a lot of inefficiencies and often tight margins. A 10% profit is normal so if you deduct one month in income, it goes sour pretty bad. Expect failures of known brands, but they might receive a bailout.

But worst hit are the small businesses that support our everyday life. A lot of restaurants will never open again. As will gyms and other service providers.

The biggest misconception is that saving lives is more important than saving the economy. But the economy is just the collective description of all the action people take to build an existence. The ease with which people’s means of supporting themselves is crushed for the greater good is astonishing.

I am convinced that far more people will die of the effects of the Corona virus than the virus itself. At least in South Asia. All the suicides, domestic violence, malnourished, alcoholism, drug abuse, unemployment, mental health issues, infant mortality, soon to start riots and ethnic tensions.

But yeah, these don’t show up in the headlines so they don’t count.

One of the nasty side-effects of a world in turmoil is that governments get to implement things they might not have otherwise.

Things directly opposed to this lifestyle.

Whether it is freedom to go where you want, freedom to write and post whatever you want, or freedom to make a living (lots of people selling on Amazon got cut because of being non-essential businesses).

It is difficult to say now how this will affect us.

But it is now that it becomes even more important to think about liberty.

What are the Opportunities?

Being a Digital Nomad has advantages. Your lifestyle is by definition lean and with little overhead.

The first thing I did when things started to look grim is to move to a family guesthouse. It is affordable and I get three meals a day, there is a guard dog, and I don’t have to leave the house. My passive income alone covers my cost of living.

Now, I don’t have any worries and can look forward.

The business of a digital nomad cannot be shut down.

You’re miles ahead of all the bricks and mortar businesses who every day see their dreams crumble before their eyes.

In 2008 there was a large move in outsourcing tasks to remote workers. This seems to be happening again, especially since so many people work online out of necessity. You could be at an advantage here, especially because you can undercut those with massive living expenses. You have the skills needed to work remotely.

The fact that lot of business is forced online should give digital nomads hope.

We discussed what governments are doing. They are desperate for capital to redistribute.

As a digital nomad living abroad, you are by definition a capital producer. It is possible that efforts to get hands into your pockets will increase. As perhaps increased scrutiny when accessing financial services.

As mentioned, the system isn’t doing to well. The system has become to fragile. Parts of it might collapse. It is now more than ever important to keep your eye on this.

Now it is really time to look after yourself. To be anti-fragile.

If you don’t know what this is, here’s Nassim Taleb (from his book: Anti-Fragile) to explain it to you:

“Some things benefit from shocks; they thrive and grow when exposed to volatility, randomness, disorder, and stressors and love adventure , risk, and uncertainty. Yet, in spite of the ubiquity of the phenomenon, there is no word for the exact opposite of fragile. Let us call it antifragile. Antifragility is beyond resilience or robustness. The resilient resists shocks and stays the same; the antifragile gets better. This property is behind everything that has changed with time: evolution, culture, ideas, revolutions, political systems, technological innovation, cultural and economic success, corporate survival, good recipes (say, chicken soup or steak tartare with a drop of cognac), the rise of cities, cultures, legal systems, equatorial forests, bacterial resistance … even our own existence as a species on this planet. And antifragility determines the boundary between what is living and organic (or complex), say, the human body, and what is inert, say, a physical object like the stapler on your desk.”

Look, the current situation might not be ideal for the free traveling careless lifestyle.

However, this lifestyle still overs the benefits of increased liberty. Smart digital nomads understand this and are re-positioning themselves as we speak.

Anyway, stay safe out there and keep looking ahead.

There is still a glorious (bumpy) road ahead ambitious mobile international entrepreneurs.

p.s. I have created a book explaining exactly how to become more resilient during the coming economic turmoil.

How to protect to lower your tax burden and protect your assets. You can find it here…